The mouse that cheered 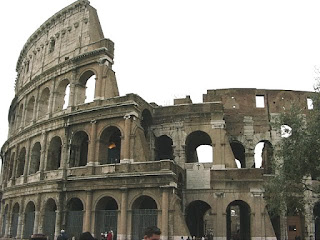 Bush went to Albania and Bulgaria for a sympathetic hearing. But he should have had a history lesson in Rome - seat of another fallen empire.

By Ian Williams
The Guardian

"......Rome should have been a learning experience for the president. All around are the ruins that show that even the mightiest empires can come a cropper. But even the founding fathers missed that message when they set up the American Republic and modelled it on its Roman antecedents rather more closely than they thought.
The rose-tinted view of history, like the equally rose-tinted view of the present, lends itself to simplification: civilisation against the barbarians, the democracies against the terrorists.

Rome at its apogee was a ferocious aggressor, whose politics were fuelled by massive corruption and injustice, and which felt no need for diplomats because they had the legions. It made war on all its neighbours and sold the defeated as slaves, with no thought for anything like the Geneva conventions. Its major public buildings, like the Stadium of Domitian - now the Piazza Navona - were places where prisoners were forced to kill each other in public for the entertainment of the masses. Empires are built on moral decline. The fall follows.......

But one cannot help suspecting that they are in some measure as intellectually isolated as they were under Enver Hoxha. Those Italian demonstrators in Rome showed no hostility to Americans, but to Bush. Roman taxi drivers and waiters alike had the courtesy to assume that their English-speaking guests shared their antipathy to the president and his policies. Someone should tell the Albanians that few Americans share their support for George Bush - and that there is no crock of gold waiting for them.

And the rest of us should note that Bush is feeling so isolated that he needed to go to two of the smallest countries in the world to get a sympathetic hearing."
Posted by Tony at 5:14 AM