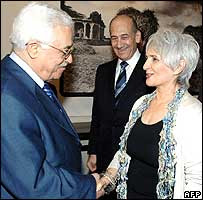 "Ramallah - Ma'an – The General Secretary of the Fatah movement in the West Bank, Hussein Ash Sheikh, called on Palestinian President Mahmous Abbas to "take action, measures and decisive decisions in order to put an end to the lawlessness in the Gaza Strip."

Ash Sheikh urged Abbas to declare a state of emergency, call for early elections or dissolve the Palestinian Authority as; he said "it is not reasonable to have the PA as a nightmare on the Palestinian minds."

In an interview with the Pal Media agency, Ash Sheikh criticized the Palestinian factions and urged them to act responsibly.