The Ass dissolves government and formally declares state of emergency 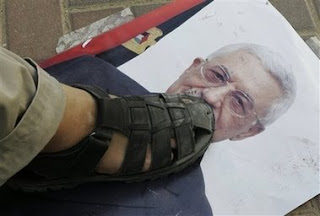 "Bethlehem - Ma'an – Palestinian President, Mahmoud Abbas has issued a decree to dissolve the government and declare a state of emergency.

Media spokesman for President Abbas, Tayieb Abdur Rahim, read the decree and announced that Ismail Haniyeh had been dismissed accordingly.

In a statement televised on the Palestinian Satellite Channel, Rahim said that events in the Gaza Strip constituted "a military coup against Palestinian legitimacy, and is a clear violation of international law."

Reacting to the news, the Hamas movement stated that "the announcement is self-contradictory, as such a decree needs a mechanism in order for it to be implemented ".

In a telephone call with Ma'an, the spokesperson for the Hamas bloc in the Palestinian Legislative Council (PLC), Salah Bardawil, said that "it is the right of the president to declaring this for one month, and in this case the government will form an emergency government. After this, he must go back to the PLC, in order to renew the state of emergency or to seek a new government."

Bardawil also stated that the Gaza Strip has now become more quiet and secure than ever before. "The obstacles which were made by a trend within the Fatah movement have been removed… Hamas has ended the battle with that current in Fatah, as neither Abbas nor other Fatah leaders were able to control that current. Someone should put an end to that. We have achieved this in a battle which lasted for two days only. Fatah and Abbas were not able and were not interested in controlling these influences within Fatah, which is why we fought this battle.""
Posted by Tony at 12:07 PM