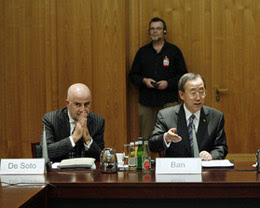 "The one-state solution for Palestine-Israel is "gaining ground," a senior UN diplomat has admitted in a leaked confidential report. Recently retired UN special envoy Alvaro de Soto wrote "that the combination of [Palestinian Authority] institutional decline and Israeli settlement expansion is creating a growing conviction among Palestinians and Israeli Arabs, as well as some Jews on the far left in Israel that the two State solutiuon's best days are behind it".....

While his broadsides at the failed peace process have been widely reported, his acknowledgment of the decline of the two-state solution has drawn less notice.

De Soto, a Peruvian diplomat who has also served as a special envoy to Cyprus, observed: "Given that a Palestinian state requires both a territory and a government, and the basis for both is being systematically undermined," an increasing number of Palestinians, Israeli Arabs and some Israeli Jews "believe the only long-term way to end the conflict will be to abandon the idea of dividing the land and instead, simply insist on respect for the civil, political and national rights of the two peoples, Jews and Arabs, who populate the land, in one State."

Contradicting peace process industry conventional wisdom and spin, which long held that Israel's 2005 settler pullout from Gaza was part of an effort to implement the "Road Map" peace plan, de Soto acknowledged that Israel was motivated entirely by concerns about the fact that Palestinians are once again on the verge of becoming the majority in Israeli-ruled territory (as they were prior to 1948). Israel is in a conundrum because further unilateral withdrawals are "off the table" while "the demographic clock continues to tick." De Soto predicts that "Should the PA pass into irrelevance or non-existence, and the settlements keep expanding, the one State solution will come out of the shadows and begin to enter the mainstream."....."
Posted by Tony at 2:40 PM