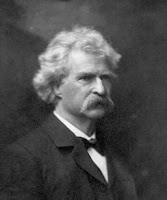 Mark Twain and the Sins of Empire

"......As the Iraq war rages on, Twain's words ring truer by the day. "The loud little handful will shout for warThen the handful will shout louder. A few fair men on the other side will argue and reason against the war with speech and pen, and at first will have hearing and be applauded; but it will not last long; those others will out shout them and presently the anti-war audiences will thin and lose popularity. Before long you will see the most curious thing: the speakers stoned from the platform, and free speech strangled by hordes of furious men. And now the whole nation will take up the war-cry, and shout itself hoarse, and mob any honest man who ventures to open his mouth; and presently such mouths will cease to open.

"Next the statesmen will invent cheap lies, putting the blame upon the nation that is attacked, and every man will be glad of those conscience-soothing falsities, and will diligently study them and refuse to examine any refutations of them; and thus he will by and by convince himself that the war is just, and will thank God for the better sleep he enjoys after the process of grotesque self-deception."

Twain, whose genius undoubtedly surpasses time and space, wrote the above passages nine decades before the world's leading statesmen, President George Bush and Prime Minister Tony Blair forged their case for war, based on falsities and refused to examine any refutations; they rallied millions, investing on their ignorance and blind patriotism to carry out a war whose outcome is akin to genocide. The text was also written long before the thousands who stood for human rights, rallied and organized against the war, defended the constitution and civil liberties were "shouted out" and "stoned from the platform"......"
Posted by Tony at 9:23 AM