Hamdan: Any uncalculated step from Abbas would complicate crisis 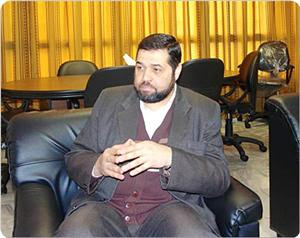 "BEIRUT, (PIC)-- Representative of Hamas Movement in Lebanon Osama Hamdan has warned that any uncalculated step in the wrong direction that might be taken by PA chief Mahmoud Abbas would complicate the crisis in Gaza further.

“Any wrong measure from PA chief Mahmoud Abbas will not resolve the crisis but it will further complicate it, and he will be responsible for any wrong decision he might take”, Hamdan affirmed in press statement he made Thursday.

He also assured leaders of the mutiny trend and the “corrupt” retinue of Abbas that any wrong decisions will not result in their ambitions being realized.

Hamdan was apparently reacting to statements uttered by Nabil Amre, Abbas’ information advisor, in a press conference he held Thursday in Ramallah city where he announced that Abbas will take important decisions relating to the PA unity government and Fatah-Hamas relationship.

“We want Abbas to take a stern stand and a courageous decision against leaders of the PA security apparatuses and corrupt PA officials who tamper with the future of the Palestinian people and who allied themselves with the Israeli occupation government against their own people”, Hamdan underlined.

But he again reiterated Hamas’ stand that it wasn’t at odds with Fatah, and that Hamas’ fight was against a group of traitors wagering on Israel and the USA, and working against the national interests of the Palestinian people.

“Our fight today isn’t against the PA security elements; but Hamas indeed fights a group of misled elements planted in those apparatuses and exploited for a suspicious agenda”, he explained.

He also highlighted that the positions of “clean” PA security elements will be preserved as they will join hands with Hamas in implementing the PA security plan to restore calm and to end security chaos in Gaza after that “group of collaborators” is completely wiped out.

QB fighters enter main base of mutineers:
On Thursday, fighters of Hamas took control of the main headquarters of the PA preventive security apparatus in Tal Al-Hawa suburb, west of Gaza city, after 24 hours of continuous clashes. Eyewitnesses and sources in the QB affirmed that the headquarters had completely fallen in the hands of Qassam fighters, and that tens of the preventive security elements surrendered.

The QB declared the area as a closed military zone and assured Palestinian inhabitants of their safety, adding they will start combing the area to clear out remnants of that misled apparatus.

The base had served as an infamous den for torturing tens of Hamas political and military leaders in mid nineties of the past century.

In a related matter, local reports suggested that tens of the PA intelligence elements were giving themselves up to Hamas fighters and pleading for their safety. The QB fighters had earlier vowed not to harm PA security elements if they lay down their arms and return to the Palestinian mainstream."
Posted by Tony at 5:18 AM