Meshal: Hamas does not want to seize power in PA 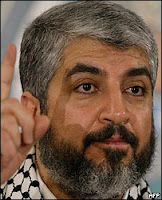 Addressing media in the Syrian capital, Meshal said that Hamas had not wanted to take over the Gaza Strip. "Hamas does not want to seize power ... We are faithful to the Palestinian people," Meshal said, promising to help rebuild Palestinian homes damaged in the months of bloody infighting. "What happened in Gaza was a necessary step. The people were suffering from chaos and lack of security and this treatment was needed," Meshal continued. "The lack of security drove the crisis toward explosion."

"Abbas has legitimacy," Meshal said, "There's no one who would question or doubt that, he is an elected president, and we will cooperate with him for the sake of national interest."

But he also warned Fatah followers not to move this conflict to the West Bank where the moderate movement is dominant.

Meshal called for the Arab League foreign ministers, who are holding an emergency meeting in Cairo to discuss the situation in Gaza, to help mediate talks between Hamas and Abbas.

"I hope [that] ... the Arab ministerial meeting in Cairo presents a strong responsible Arab stance, as an umbrella to hold the national Palestinian dialogue to approach a Palestinian accord," Meshal said.

Meshal said Abbas' dissolution of the unity government "will not remedy the situation ... and will not solve the problem. There will be no two governments and no division of the homeland."

Meshal added that a national unity government is the only solution, and urged Hamas in Gaza not to raise Hamas' banners and overtake security compounds any more....."
Posted by Tony at 1:22 PM