After Receiving the Orders From Rice, Abbas Declares Emergency 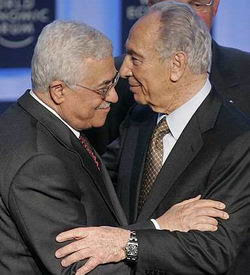 "GAZA (Reuters) - Hamas fighters hunted down key loyalists of the Western-backed Palestinian president in the Gaza Strip on Thursday after the Islamists seized most of the final strongholds of the secular Fatah movement in the enclave.

In the West Bank, Abbas, seen as a pragmatist committed to negotiation, signed decrees dismissing a three-month-old unity government formed with Hamas and declaring a state of emergency......

A second decree establishes a state of emergency and a third establishes an "emergency" government, officials said.

Israeli Prime Minister Ehud Olmert has said an international force along Gaza's border with Egypt should be considered. But despite some international murmurs of assent, putting such a force together against Hamas's wishes seems unlikely for now."

"Palestinian Authority President Mahmoud Abbas announced Wednesday evening that he was dissolving the Palestinian unity government and that he planned to declare a state of emergency in the Gaza Strip, in light of the ongoing violence between Hamas and Fatah..

Abbas had informed the representatives of the Quartet, the US and Jordan of his plans prior to making the official statement. The president intends to call for the deployment of a multinational force in Gaza, in a bid to overpower Hamas......"