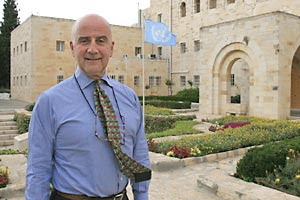 "A former UN Middle East envoy quit his job last month with bitter allegations that UN policy in the region had failed because it was subservient to U.S. and Israeli interests, a newly leaked document shows.

In a confidential end of mission report, Alvaro de Soto poured scorn on the Quartet negotiating group of the United States, Russia, European Union and United Nations, and suggested the world body should pull out.

De Soto, a Peruvian diplomat who formerly worked on El Salvador, Cyprus and the Western Sahara, spent two years on the Middle East before resigning in May, ending a 25-year UN career. He was replaced by Briton Michael Williams.

His scathing 53-page farewell, addressed to a handful of top UN officials made clear he left in frustration that he was not being listened to.

In the document dated May 5, he railed at restrictions he said were placed on him by UN headquarters against talking to the Hamas-led Palestinian government and to Syria.

De Soto condemned economic sanctions imposed by Israel, the United States and the EU on Hamas after it won Palestinian elections last year and said their effective endorsement by the Quartet had had "devastating consequences" for Palestinians......

De Soto blasted what he called "the tendency that exists among U.S. policy-makers ... to cower before any hint of Israeli displeasure and to pander shamelessly before Israeli-linked audiences."

But much of his criticism was directed at the United Nations itself, where, he said, "a premium is been put on good relations with the U.S. and improving the UN's relationship with Israel.".......

The Peruvian diplomat said UN Secretary-General Ban Ki-moon should "seriously reconsider" continued membership in the Quartet, which he said had become a "side-show" and "pretty much a group of friends of the U.S.""