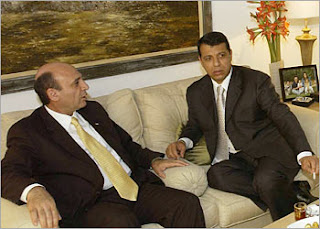 "......It was, for many Palestinians, a confusing and unaccustomed sight: black-hooded and normally disciplined Hamas fighters, seemingly driven by devotion to God, stripping away chandeliers, carpets, a bathtub — earthly goods but also symbols of what many see as Fatah’s corruption and excess. After the fighters left, poor people with donkey carts arrived, sweeping up stray bits of wood and metal and even uprooting the dapper Mr. Dahlan’s garden plants.

“I will explain it to you,” said one looter, Mazen Qasas, a vendor. “I am 34. I am married. I have six children. I am looking for a lamp, anything I can sell or use for my poor house. We are very poor. This is public property. These are corrupt people,” he said, referring to Fatah leaders. “They took everything.”

Abu Muhammad Ashor, a 33-year-old policeman who until recently supported Fatah, looked with amazement and anger at the fine beige tiles that lined Mr. Dahlan’s living room. “Look at these tiles,” he said. “With these tiles, we all could have bread every day.”

Looters also descended on the presidential compound of Mahmoud Abbas and an upscale beach compound used by leading members of Fatah. Hamas, which built its support partly on a reputation for being above corruption, condemned the looting, on television and from the pulpits on the Muslim day of prayer, as “illegitimate and against religion,” demanding that the looters return all they took......"
Posted by Tony at 10:56 AM