Establishing A NATO Foothold in Gaza? 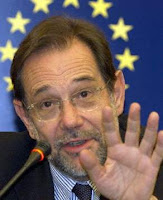 "The European Union would consider participating in an international force in Gaza if asked by the major players in the region, the EU's foreign policy chief Javier Solana said Wednesday.

"If we are asked, of course, we will consider the possibility," Solana told reporters.

He spoke in response to a suggestion by Israeli Prime Minister Ehud Olmert that international forces could be stationed along the Gaza Strip's volatile border with Egypt to prevent arms from reaching Palestinian militants......."
Posted by Tony at 4:23 AM