U.S. Mideast Envoy On Palestinian Civil War: "I Like This Violence" 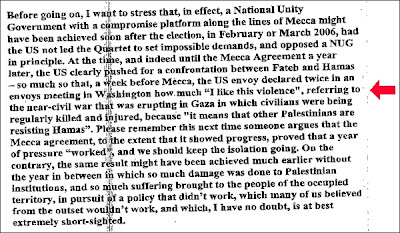 ".....Now, here's David Welch, Assistant Secretary of State for Near Eastern Affairs and US Envoy to the Middle East, speaking in private several weeks before Rice. This appears on p.21 of the leaked report (pdf) by Alvaro de Soto, former UN coordinator for the Middle East:

...the US clearly pushed for a confrontation between Fateh and Hamas -- so much so that, a week before Mecca, the US envoy declared twice in an envoys meeting in Washington how much "I like this violence", referring to the near-civil war that was erupting in Gaza in which civilians were being regularly killed and injured, because "it means that other Palestinians are resisting Hamas"......"
Posted by Tony at 8:35 AM