It's All About Israel 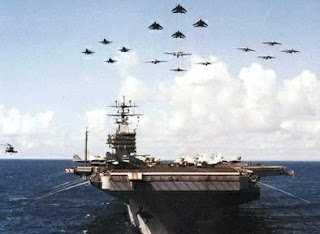 What's behind the calls for the U.S.
to bomb Iran?

"......This isn't about America, however, as Pollak makes all too clear. The current propaganda campaign on behalf of striking Iran – a campaign given a big boost by the Republican candidates for president, who, except for Ron Paul, favor hitting Iran with nukes – is all about Israel. It's as simple as that.

The question before the house is this: should the United States exhaust itself militarily, economically, and psychologically in order to ensure indefinite Israeli domination of the Middle East? To the Israel Lobby, this is a no-brainer: of course it should. Anything less than unconditional support for Israel's strategic objectives would be anti-Semitic and "hateful."

To which an increasing number of policy wonks, such as Brzezinski, and ordinary Americans, such as myself, answer: we won't be intimidated any longer. It's high time the central premise of American policy in the Middle East is challenged and the specialness of the "special relationship" is held up to scrutiny. This latest demand – that the U.S. expend its resources, including the lives of its young people, in yet another war on Israel's behalf – has nothing to do with defending the Jewish state against what Pollak admits is the canard of nuclear incineration at Iranian hands, and everything to do with keeping the Israeli boot firmly on Arab and Muslim necks. And that cause is not worth a single American life. "
Posted by Tony at 8:16 AM