The Neocon Threat to American Freedom 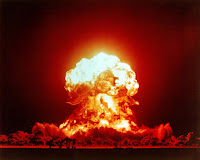 The War on Truth and Liberty

".......The absurd analogy with Korea is so far-fetched that it raises the question whether the Bush/Cheney regime has entered a new, higher level of delusion. Bush cannot keep troops in Iraq permanently unless he intends to remain permanently in the White House. Even some Republicans in Congress are talking about beginning withdrawals of US troops in September. Republicans believe that if withdrawals do not begin, their party will be wiped out in the 2008 election.

A sane reader might wonder why neoconservatives would want to expand a conflict in which the US has failed. Surely, even delusional "cakewalk" neoconservatives must realize that attacking Iran would greatly increase the threat to US troops in Iraq and perhaps bring missile attacks on oil facilities and US bases throughout the Middle East. An attack on Iran would further radicalize Muslims and further undermine US puppets in the Middle East. It could bring war to the entire region.

The neoconservatives have put the elements of their plan in place. They have powerful naval forces on station off Iran's coast. They have convinced President Bush that only by attacking Iran can he prevail in Iraq......"
Posted by Tony at 9:41 AM