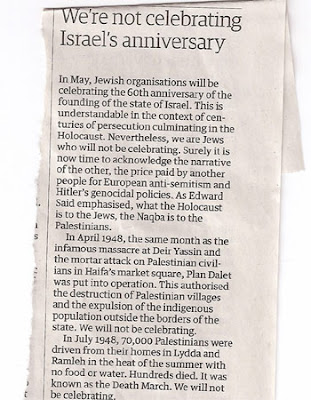 "'We cannot celebrate birthday of state founded on terrorism… which engages in ethnic cleansing,' says group of prominent British Jews, saying time has come to recognize 'Naqba' as Palestinian equivalent to Holocaust

On the eve of Holocaust Remembrance Day and a week before Israel marks its 60th Independence Day, a group of over 100 British Jews comprised of well-known academics, writers, actors and other public figures has launched a scathing attack against the Jewish state.

'We're not celebrating Israel's anniversary,' proclaimed the letter carried by the Guardian newspaper on Wednesday. Among the signatures of those claiming Israel forced 70,000 Palestinians into a Death March in 1948 are Prof. Haim Bresheeth, a professor at the University of East London who organized the call for an academic boycott against Israel, playwright Harold Pinter, Attorney Daniel Machover, who filed a lawsuit against Maj. Gen. Doron Almog, and Stephen Fry.

"We cannot celebrate the birthday of a state founded on terrorism, massacres and the dispossession of another people from their land," say the letter writers. "We cannot celebrate the birthday of a state that even now engages in ethnic cleansing, that violates international law, that is inflicting a monstrous collective punishment on the civilian population of Gaza and that continues to deny to Palestinians their human rights and national aspirations. We will celebrate when Arab and Jew live as equals in a peaceful Middle East."

"In July 1948, 70,000 Palestinians were driven from their homes in Lydda and Ramleh in the heat of the summer with no food or water. Hundreds died. It was known as the Death March. We will not be celebrating," the letter continues.

"In all, 750,000 Palestinians became refugees. Some 400 villages were wiped off the map. That did not end the ethnic cleansing. Thousands of Palestinians were expelled from the Galilee in 1956. Many thousands more when Israel occupied the West Bank and Gaza. Under international law and sanctioned by UN resolution 194, refugees from war have a right to return or compensation. Israel has never accepted that right. We will not be celebrating."......"
Posted by Tony at 4:55 PM