The World must Step in 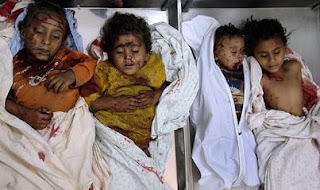 "This morning, seven residents of the northern Gaza Strip town of Beit Hanoun were killed in Israeli shelling. The tank shell directly hit a home in the Azbat Abed Rabbo quarter of the town, taking the lives of an entire family. Khadra Abu Muteq was killed along with her four children: one year old Musaab Abu Muteq, Hana’ Abu Muteq, 3, Saleh Abu Muteq 4, and Rudeineh Abu Muteq, 6. One teen, 17-year old Ayoub Atallah was also killed by the shelling and his friend Mutassem Sweilem injured as they were walking to school. Nine others were injured in the attack, several of them in serious condition.

The Palestinian Initiative for the Promotion of Global Dialogue and Democracy MIFTAH is appalled by today’s events and by Israel’s apparent disregard for the sanctity of human life. MIFTAH not only strongly condemns the attack, which is a flagrant violation of humanitarian law and human rights, but demands that the international community intervene to halt the killing of innocent Palestinian civilians. The silence of the international community and the United Nations has allowed Israel to believe it can act with impunity in the name of its security even when this means the killing of innocent women and children.

MIFTAH believes it is time that Israel is held accountable in international courts and in the corridors of the Security Council for the crimes it commits against Palestinians. Similar to the crippling sanctions the UN imposes on other countries that fail to comply with international law, Israel should not be immune to such measures. If the international community continues to turn a blind eye to the atrocities committed against the Palestinians, such as the killing of mother and children today, the Palestinians will continue to be targets of indiscriminate Israeli military attacks, which far too often claim the lives of innocent bystanders.

MIFTAH would also like to extend its deepest condolences to the Abu Muteq family for their horrendous loss. On this occasion, we also call on those Israelis of conscience to pressure their government into changing its policies in the Gaza Strip and working seriously towards a just and comprehensive solution that would lead to an end to Israel’s illegal occupation and the establishment of a viable and independent Palestinian state."
Posted by Tony at 6:27 AM