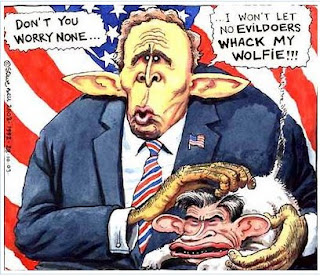 "Former US Deputy Secretary of Defense Paul Wolfowitz has claimed that the occupation of Iraq by American forces 'ended in June 2004'.

"I'm afraid that the label occupation sticks to us even to this day, although the occupation ended in June of 2004," said the Iraq war architect at Hudson Institute Monday.

Wolfowitz said the Bush administration biggest mistake in Iraq was 'maintaining an occupation government for over a year'.

The former defense official was presumably referring to the June 2004 act of 'officially' transferring sovereignty to the Iraqi government.

Wolfowitz, however, refrained from acknowledging the presence of some 150,000 troops still stationed in the oil-rich Middle Eastern country.

The 64-year-old politician has been hailed as 'a major architect of President Bush's Iraq policy and, within the administration, its most passionate and compelling advocate'."
Posted by Tony at 4:41 AM