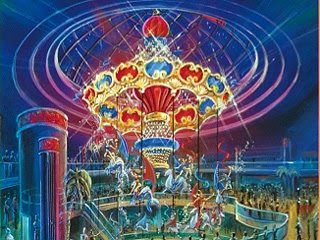 The entertainment park is an integral part of war propaganda.

Establishing an American cultural outpost in an occupied land serves to uphold the legitimacy of the invaders and their Worldwide "cultural values".

Most of the country's cultural and educational infrastructure including museums, schools, universities, parks, theaters, cinemas have been destroyed and now the invaders are "helping to rebuild".

Through Hollywood imagery, the Baghdad style Disneyland is intended to nurture Iraqi public opinion, to mould a pro-American view of the World.

Through the use of motion based simulations and sophisticated entertainment equipment, the harsh daily realities of poverty and military occupation are replaced by a World of fiction and fantasy.

The concept underlying Disney's Imagineering (developed by RSE) is to "overcome the barriers between reality and dreams".

The objective is to replace reality by a dream world. Iraq's daily realities of death, destruction and torture are replaced by a "Dream World Made in America".

The imagery and motion simulations intended for Iraqi children and adolescents provide a "human face" to the American invaders.

The project constitutes a despicable form of war propaganda. It is a cover-up of the extensive war crimes committed against the Iraqi people in the name of an illusory "American Dream".......

The Baghdad Disneyland-style project has all the essential features of a PsyOp. It is intended to instill American values and destroy Iraqi identity.

"The people [of Iraq] need this kind of positive influence. Its going to have a huge psychological impact," said Mr. Werner of C3, who was referring to the role of RSE motion simulations underlying RSE's "imagineering" technology.

In a cruel irony the PsyOp target group are Iraqi Children:

“There are all sorts of investment opportunities all over Iraq. But it’s not just hydrocarbons. Half the Iraqi population is under the age of 15. These kids really need something to do,” (Mr. Brinkley, quoted in The Times, April 24, 2008)

The historical memory of Mesopotamia is wiped out.