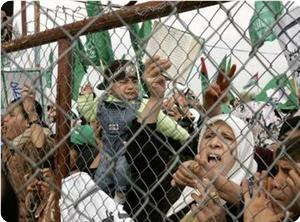 Sami Abdel-Shafi in Gaza City
The Guardian, Saturday May 3 2008

"......That feeling of strangeness continued as I read the statement delivered by the Quartet in London yesterday. The four powers mediating in the Middle East - the United Nations, European Union, United States and Russia - spoke of "deep concern" and demanded "concrete steps by both sides". There was no sense, however, that they had properly grasped the depth of Gaza's plight or the realities in the West Bank and East Jerusalem. World politics seems to have morphed into a diplomacy of denial - a denial of how much more firm the international community must be towards the cause of an occupied and dying people.

This diplomacy of denial only gives succour to Israel's urge to exercise its will over Palestinians, and over besieged Gazans particularly. Israel's cabinet seeks to play God over Gaza by bluntly controlling every facet of civilian life. Tearing up the West Bank presents a threat of similarly terrible consequences. Israel's separation barrier and hundreds of checkpoints threaten to create numerous smaller Gazas in the West Bank. The villages and cities that are becoming increasingly isolated and economically strangled today could become hotspots of desperation and violence tomorrow.

Last week in Gaza, Israel not only continued depriving the people of fuel and cooking gas, it held back supplies to UN agencies such as Unrwa - the agency devoted to the health, education, food supplies and more of Gaza's poor and deprived population. In hindering the operations of the UN, Israel was hindering the Quartet, of which the UN is a part.

Israel's current policies are slowly expelling Palestinians from their land and pushing those who remain into indignity, desperation and extremism. The word "siege" no longer seems adequate to describe what is being done to Gaza. The territory's 1.5 million people have been thrust into a humanitarian catastrophe. It has become a nonsense to speak of peace negotiations while Israel creates more injustices on the ground in the West Bank and East Jerusalem........"
Posted by Tony at 6:42 AM