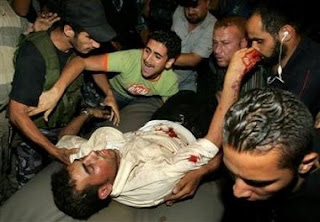 Podcast, The Electronic Intifada, 1 May 2008

"This week on Crossing The Line: On 17 April 2008, Fadel Shana'a, a Palestinian camerman with Reuters news agency, was killed when he was struck by an Israeli tank shell in the Gaza Strip. Even though he was holding a camera and was clearly marked as a member of the press, both on his body and his vehicle, Shana'a was fired at by an Israeli tank less than a mile away. Host Naji Ali speaks with Mohammed Omer, a Palestinian journalist based in the Gaza Strip, about the dangers of reporting on Israeli violence......"

Click Here to Listen
Posted by Tony at 6:23 AM