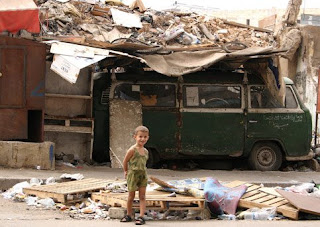 "BEIRUT, 1 May (IRIN) - With inflation in double digits and the cost of living rising, the government has proposed raising the minimum wage for the first time in a decade, but Palestinians say they continue to be marginalized in the labour market.

Several hundred Palestinians protested at the edge of Shatila camp in south Beirut on 30 April ahead of the 1 May labour day holiday, traditionally a time for workers' to air their grievances.

"We are humans, we have the right to live," shouted the protesters. "We are half humans in Lebanon."

Palestinians in Lebanon are barred from working in 70 professional vocations. They cannot work as lawyers and doctors, and cannot own or inherit property. Unemployment is rife, particularly inside the dozen refugee camps which are home to just over half the country's 400,000 Palestinian refugees. In Ein al-Hilwe, the largest and most dangerous camp, leaders of factions estimate unemployment at 70 percent......."
Posted by Tony at 6:26 AM