Is Al-Jazeera Becoming the New FOX News of the Arab World?? Is This One Result of Livni's Visit to Qatar?? 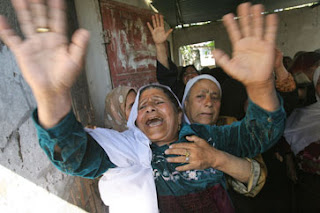 "Israel has said it will further investigate the deaths of four Palestinian children and their mother killed during an Israeli air raid on the Gaza Strip.

While Palestinian witnesses blamed the deaths on an Israeli missile, the Israelis say the blast was caused when explosives carried by fighters detonated during the raid.

David Chater, Al Jazeera's correspondent reporting from the scene on Tuesday, said there is "a mixture of truth in both of these stories"......"
Posted by Tony at 6:01 AM