Is Sadr City Becoming the Next Gaza? 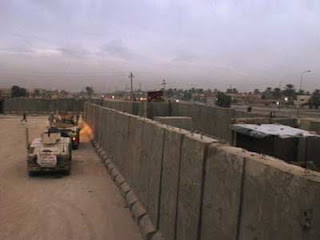 "......In an area only half the size of Manhattan, bombs have been dropped from U.S. warplanes, Predator Hellfire missiles fired and Apache attack helicopters dispatched. Yet the heart of Sadr City remains unpenetrated and only its southern outskirts precariously held. The difficulties of street warfare and a recent sandstorm – considered divine intervention by some – have hampered efforts to make further gains. The U.S. is now in the process of erecting a two-mile concrete wall which will separate the southern quarter’s Thawra and Jamila districts from the rest of the city. Apparently, what cannot be defeated will be imprisoned.

As is custom in conflicts where civilians frequently pay the ultimate price, the U.S. has resorted to the classic Israeli defense of blaming the victims. A Associated Press photo showing two-year-old Ali Hussein being pulled from the rubble of his home after it was destroyed by U.S. missiles (he later died in the hospital) caused military spokesman Lt. Col. Steve Stover to comment, “The sole burden of responsibility lies on the shoulders of the militants who care nothing for the Iraqi people."

Lost in the coverage of this conflict has been the humanitarian crisis unfolding in Sadr City. On April 23rd, the International Committee of the Red Cross (ICRC) reported that the fighting has isolated civilians from food and water supplies and caused hospitals to run out of basic necessities such as dressings and anesthesia. They continue to transport 10,000 liters of drinking water daily to the area.......

Sadr City and Gaza are starting to look more and more alike and their inhabitants have much in common with one another. Both live in densely-populated, poverty-stricken areas where food, clean water, fuel and medical supplies get harder to come by as life under siege takes its inevitable toll; both are reeling from Israeli and American military strikes killing scores of civilians in their midst. Al-Sadr’s eight-month ceasefire is in jeopardy of being rescinded while Hamas’ offer for one was quickly rejected.

Of all the unmitigated disasters the occupation of Iraq has wrought and of all the comparisons made to other foreign misadventures, the U.S. siege of Sadr City and its unfortunate similarity to the Israeli siege of Gaza is certainly one of the most damning. "
Posted by Tony at 7:12 AM