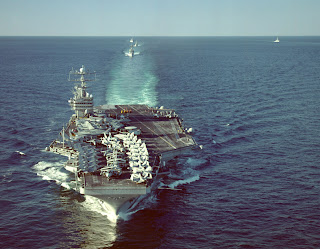 Gates: Second US carrier deployed to Gulf is “reminder” to Tehran

"During a visit to Mexico City, US defense secretary Robert Gates said April 29 that the arrival of the USS Abraham Lincoln in the Gulf should be seen as a reminder of US military power in the region. He flatly denied the US was preparing the ground for military strikes against Iran. But as DEBKAfile and DEBKA-Net-Weekly have reported in the last ten days, the carrier’s arrival and additional US military steps have underscored the hardening of US rhetoric against Iran.

DEBKAfile: So far, the Tehran government is not backing off and does not appear deterred by Washington’s warnings or its military movements.

Friday, April 25, Adm. Michael Mullen, chairman of the Joint Chiefs of Staff, told reporters in Washington that the Pentagon is planning for “potential military courses of action” against Iran. He spoke of rising concern about the Tehran government’s “increasingly lethal and malign influence” in Iraq.

A conflict with Iran would be “extremely stressing” he said, but not impossible and “it would be a mistake to think that we are out of combat capability.” The admiral stressed the reserve capabilities of the Navy and Air Force.

CBS News also reported that the Pentagon has ordered new options be drawn up for attacking Iran and that the State Department has begun drafting an ultimatum that would tell Iran to stop meddling or else.

Gates added that the rising number of US casualties in Iraq – 44 military deaths in April – was partly accountable to the rocketing of the Green Zone from Sadr City by Shiite “special groups” which are backed by Iran.

The defense secretary also pointed out that Iran continues to back the Taliban in Afghanistan."
Posted by Tony at 4:57 AM