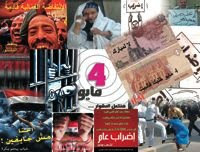 "CAIRO, May 2 (IPS) - Hundreds remain in detention following a nationwide protest Apr. 6 against rising food prices and political stagnation. But this has not deterred activists from calling for a second general strike on May 4, timed to coincide with President Hosni Mubarak's birthday.

"About 40 percent of the Egyptian people answered the call to strike earlier this month," Mohammed Zeki, a 28-year-old Internet-based activist from Cairo told IPS. "Despite the state's dictatorial methods, we expect an even greater response on May 4.".......

The use of electronic media, meanwhile, appears to now be a regular feature of Egyptian political activism.

"We're sending out emails and mobile phone messages and communicating on Facebook groups in order to get the message out," said Zeki.

As was the case with the Apr. 6 protest, the role played by Egypt's main opposition groups in the planned May 4 strike has so far been negligible.

"Opposition parties still haven't announced their respective levels of participation," said Ali. "But if they take part by organising street demonstrations, there could be more violent confrontations with security forces."

Unlike the heavy-handed state media campaign that preceded April 6 -- in which the interior ministry warned citizens not to take part -- the government has until now remained largely silent about the upcoming protest.

"We're still waiting for the government's reaction," said Abu Saeda. "It's possible that the interior ministry will try to close down the Facebook site or arrest the group's founding members."

Protest advocates seem prepared for any eventuality. "Sure, they might arrest me for promoting the call to strike," said Zeki. "But I haven't done anything wrong, and there are others that will continue the fight.""
Posted by Tony at 5:28 AM