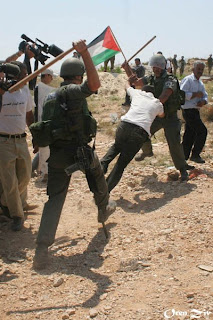 "This article summarizes an August 2007 B'Tselem report now available in print. It's one of a series of studies it conducts on life in Occupied Palestine to reveal what major media accounts suppress. This one is titled: "Ground to a Halt - Denial of Palestinians' Freedom of Movement in the West Bank."

B'Tselem has a well-deserved reputation for accuracy and integrity. It's the Jerusalem-based independent Israeli Information Center for Human Rights in the Occupied Palestinian Territories (OPT). It was founded in 1989 by prominent academics, attorneys, journalists and Knesset members to "document and educate the Israeli public and policymakers about human rights violations in (Occupied Palestine), combat (the Israeli public's) denial, and create a human rights culture in Israel" to convince government officials to respect human rights and obey international law.......

Israel's repressive measures force West Bank Palestinians to live in a constant state of uncertainty, prevent them from making plans, deny them their basic rights, harm them when emergencies arise, and overall consign their lives to the will and whims to an illegal occupier.

Beyond the immediate harm that's considerable, the West Bank's geographical division causes severe long-term detriment to the entire Palestinian fabric of life - affecting their economic, political and social welfare. The result is an entire nation locked down, punished for being unwanted and in the way, and denied their right of self-determination and free movement on their own land.

Israel's justification is fraudulent on its face, yet goes unchallenged by the world community as well as by neighboring Arab states. Shamefully and willfully, they turn a blind eye to a human calamity they won't confront and denounce publicly as illegal and unacceptable.

B'Tselem has no such hesitancy. It ends its report by calling on Israel to:

-- "immediately remove all the permanent and sweeping restrictions on movement inside the West Bank (including the Separation Wall ruled illegal by the International Court of Justice). In their place, Israel should" protect its citizens along the Green Line and inside the Jewish state according to the rule of law;

-- "act immediately to evacuate all the settlements in the West Bank. Until this is done, Israel" has every right to protect its settlers security, but not to the detriment of the Palestinian people who are the lawful occupants of their own land; and

-- "verify, before any temporary restriction....is approved (while settlements remain in place)," that it's "needed for a legitimate security purpose and that the resultant harm to the Palestinian population will be proportionate," according to international law. Restrictions in place "must be incorporated in a written order that specifies the nature of the restriction and the period of time it will remain in force."

Until Israel takes these measures and begins ending its 41 year occupation, it will continue violating international law and remain in violation of dozens of UN resolutions condemning it for its actions, deploring it for committing them, and demanding they be ended. So far, Israel shows no signs of complying and continues acting with impunity, arrogance and defiance of the rule of law it disdains."
Posted by Tony at 5:49 AM