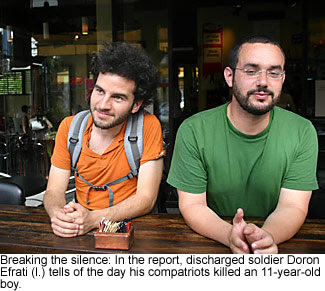 In a report this week, 39 soldiers give eyewitness accounts from their patrols in and around the West Bank city of Hebron.

"....Today, he is one of 39 recently discharged soldiers whose testimonies are part of a grim new report on the situation in the West Bank city of Hebron, where the Israeli Defense Forces (IDF) oversee a volatile population of 700 to 800 Jewish settlers living amid nearly 170,000 Palestinians. The 118-page report, which tells of systematic mistreatment of local Palestinians by both soldiers and settlers, was released during this week’s Passover holiday.

The timing is not coincidental. Forty years ago this week, a small group of far-right religious Israelis, led by Rabbi Moshe Levinger, wrangled with a reluctant Israeli military establishment to hold a Passover seder in Hebron, revered as the burial place of several biblical patriarchs and matriarchs. Rabbi Levinger, who saw in Israel’s 1967 military victory over the Arabs a heralding of a Messianic-era redemption, rented hotel rooms for himself and his followers the following Passover, and refused to leave. Today, his flock constitutes the only Jewish settlement inside a Palestinian city.

The report, put out by the nongovernmental group Breaking the Silence, is meant to challenge what the group sees as a growing assumption by Israelis that Israeli-Palestinian friction in the West Bank has quieted down since the Al-Aqsa Intifada petered out around 2004.

“A lot of people come and say, ‘Oh, that’s all in the past,’ ” explains Yehuda Shaul, executive director of the group, which has brought 3,000 people on eye-opening trips to Hebron. On the contrary, he adds, he sees abuses as increasingly institutionalized. “The whole point of Breaking the Silence is to understand the moral price tag of a military occupation.”.....

But in the report, 39 recently discharged soldiers who served in the Hebron area between 2005 and 2007 describe a pattern of repeated violations. Mr. Efrati is one of the five who have made their identities known; most offered anonymous accounts. The IDF does not investigate “anonymous complaints,” said the spokesman, who asked not to be named in keeping with Israeli army policy.

One of Efrati’s worst experiences started when some Palestinian kids threw rocks and Molotov cocktails at his unit when he was out on patrol in south Hebron. About 40 minutes afterward, he says, other soldiers in his unit identified and shot dead one of the youths who threw a flaming bottle. He was 11 years old.

“It was reported in the Israeli media later that one terrorist with a Molotov cocktail was killed,” he recalls, sitting in a Tel Aviv cafe. “I didn’t feel so good, but most of my friends didn’t care, and we had so much to do. These things were happening all the time,” he says........"
Posted by Tony at 1:06 PM