Why is He Exonerating The Criminals and Partners in The Siege? Will Hamas Please Make Up its Mind About the Arab Role in The Siege? Enough Doubletalk! 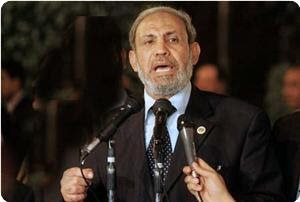 Zahhar: Saudi Arabia, Arabs exerting efforts to break Gaza siege [How can he say that? KSA is the main backer of USraeli policies in the Arab world]

"RIYADH, (PIC)-- Dr. Mahmoud Al-Zahhar, one of Hamas's prominent political leaders, has said that Saudi Arabia along with Arab countries [which countries? Who are you kidding, Mr. Zahhar?] was exerting "big efforts" [can you honestly say that with straight face?] to end the siege imposed on the Gaza Strip.

Zahhar, who is a former PA foreign minister, told Saudi paper 'Okaz' that Saudi Arabia is coordinating efforts with Egypt to break the siege [they are playing games with you, Mr. Zahhar, and you trust them?].

He denied, in another context, that guarantees were offered for a truce with the Israeli occupation, recalling that his Movement offered truce twice before with the IOA in 2005 and in 2006 and in each time the IOA breached the calm and killed leaders of Hamas.

Zahhar, who is also an MP, denied that differences existed between his Movement and Islamic Jihad over the truce, saying that details of the calm would be tabled with all resistance factions.

He stressed that Rafah border terminal among other crossings in the Strip should be opened with the start of the truce, which, he highlighted, must be reciprocal and simultaneous."
Posted by Tony at 5:09 AM