Partners in Crime: The IOF and Abbas 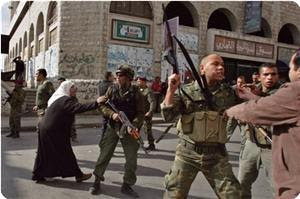 "GAZA, (PIC)-- A report issued by the Hamas information office stated that the PA security apparatuses within the context of security coordination with Israel kidnapped 80 Palestinians affiliated with Hamas in the West Bank in April.

Regarding the Israeli aggression on the Palestinian people during the same month, the IOF troops killed 79 Palestinians including 18 children, 75 of the victims were killed in the Gaza Strip, according to the report......."

"NABLUS, (PIC)-- The Israeli occupation forces rounded up 363 Palestinians in the past month of April using "savage means" such as sabotaging gates and humiliating detainees, the Palestinian center in defense of prisoners said.

It issued a statistics report charging that the IOF troops were deliberately spreading panic and terror in their operations, describing the practice as "inhuman" and "barbaric".

The IOF troops used hounds to terrorize civilians, it said, noting that the soldiers beat up detainees and their families during the kidnap in violation of international laws and treaties.

The center pointed out that the soldiers rounded up children, women and even mentally retarded persons, and added that most of the kidnapped were from Nablus district.

Locals said that dozens of Jewish settlers attacked the homes of Palestinian farmers in the area and the Palestinians tried to defend themselves but an IOF force backed up the settlers and arrested five of them."
Posted by Tony at 5:58 AM