Sami al-Hajj hits out at US captors 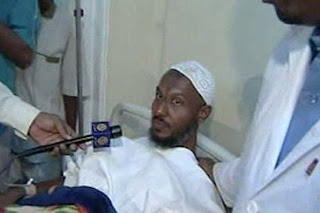 "Al Jazeera cameraman Sami al-Hajj has hit out at the US treatment of detainees at the Guantanamo Bay military prison where he was held for nearly six and a half years.

Al-Hajj, who arrived in Sudan early on Friday, was carried off the US air force jet on a stretcher and immediately taken to hospital.

Later, he had an emotional reunion with his wife and son.

His brother, Asim al-Hajj, said he did not recognise the cameraman because he looked like a man in his 80s.

Still, al-Hajj said: "I was lucky because God allowed that I be released."

But his attention soon turned to the 275 inmates he left behind in the US military prison.

"I'm very happy to be in Sudan, but I'm very sad because of the situation of our brothers who remain in Guantanamo. Conditions in Guantanamo are very, very bad and they get worse by the day," he said from his hospital bed.

"Our human condition, our human dignity was violated, and the American administration went beyond all human values, all moral values, all religious values.

"In Guantanamo ... rats are treated with more humanity. But we have people from more than 50 countries that are completely deprived of all rights and privileges.

"And they will not give them the rights that they give animals," he said.

Al-Hajj complained that "for more than seven years, [inmates] did not get a chance to be brought before a civil court to defend their just case"......

He was seized by Pakistani intelligence officers while travelling near the Afghan border in December 2001.

Despite holding a legitimate visa to work for Al Jazeera's Arabic channel in Afghanistan, he was handed to the US military in January 2002 and sent to Guantanamo Bay.
Al-Hajj, who is originally from Sudan, was held as an "enemy combatant" without ever facing trial or charges.

Al-Hajj was never prosecuted at Guantanamo so the US did not make public its full allegations against him......

David Remes, a lawyer for 17 detainees at Guantanamo Bay, told Al Jazeera that the treatment al-Hajj received "was more horrific than most" and that there was "an element of racism" in the way he was treated.

He said he had been in contact with the lawyer representing al-Hajj and it appeared the cameraman had been "psychologically damaged".

"The Europeans would never receive this treatment," Remes said.

About 275 detainees remain at Guantanamo and the lawyer said European detainees had all been returned to their country, leaving nationalities such as Yemenis - who now constitute one third of the inmate population......"
Posted by Tony at 3:55 AM