UN facing increased delays at Israeli checkpoints. Is it A Genocide Yet? 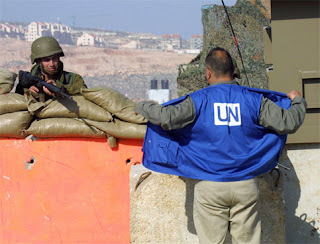 "JERUSALEM, 30 April (IRIN) - Increased Israeli restrictions on the checkpoints around East Jerusalem have caused more delays and more lost man hours for UN staff in March 2008 than in all of 2007, the UN's Office for the Coordination of Humanitarian Affairs (OCHA) has reported.
In the Humanitarian Monitor for March, released on 24 April, OCHA said "operations were significantly affected" and almost daily UN vehicles were delayed and even turned back by Israeli soldiers at checkpoints south of Jerusalem.

Israeli soldiers have increasingly insisted on searching UN vehicles at the checkpoints as a condition for being allowed through, despite the fact that Israel signed the 1946 Convention on the Privileges and Immunities of the UN which normally prohibits such searches.......

"It is becoming increasingly difficult to maintain large-scale, long-term humanitarian operations given the closures," Christopher Gunness, a spokesman for UNRWA, the UN agency for Palestinian refugees, told IRIN, adding that "aid is becoming more expensive and work is becoming less effective."

In the Nablus and Hebron districts, as well, UN agencies and NGOs said they have suffered from delays and other problems at the checkpoints.

The crossing points to the Gaza Strip remained problematic. National UN staff members in Gaza are generally unable to leave the enclave, even on official UN duty.

"Getting our [Palestinian] staff out of Gaza is next to impossible," a UN medical aid worker told IRIN.

Also, when permits are issued for these workers they tend to be valid for short periods of time or may be granted only as single entry passes......."
Posted by Tony at 5:30 AM