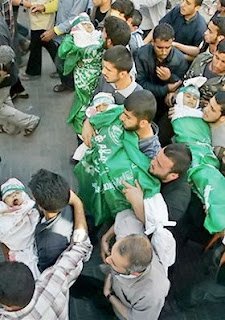 What's a Jewish holiday without a massacre?

"PCHR strongly condemns the heinous crime committed by Israeli Occupation Forces (IOF) this morning in Beit Hanoun in the northern Gaza Strip, resulting in the killing of a mother and four of her children, aged 1-5, and the moderate injury of another two of the woman’s children.

The Center’s preliminary investigation indicates that at approximately 6:00 on Monday, 28 April 2008, IOF supported by more than 20 heavily armored military vehicles moved approximately 1200 meters inside the Gaza Strip in the town of Beit Hanoun. The raiding forces took positions on the Water Reservoir Hill, apposite El-Nada Housing Project, in Izbit Abed Rabbo, and in Sultan Abd El-Hamid Street west of the town. IOF fired heavily as it moved and took up positions......

The children killed are:

The IOF incursion continued at the time of publication. And IOF forces were bombarding El-Nada Housing Project and conducting raids and arrests in Sultan Abd El-Hamid Street and El-Ghazalat area near Erez Crossing north of Beit Hanoun.

These victims bring to 312 the total number of Palestinian victims who have been killed in the Gaza Strip in 2008. They include 197 unarmed civilians (63%) who were killed. Among the civilians killed are 44 children and 14 women. As a result, the year 2008 is the worst with regards to the number of victims killed compared with the 3 previous years......"
Posted by Tony at 5:53 AM