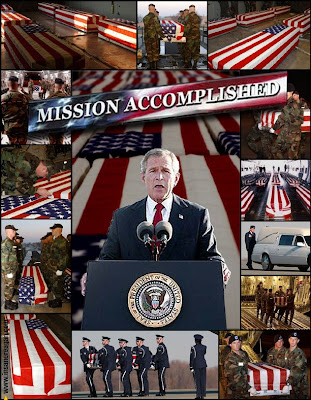 by Pepe Escobar and Tom Engelhardt
"It's like old times in the Persian Gulf. As of this week, a second aircraft carrier battle task force is being sent in – not long after Chairman of the Joint Chiefs Adm. Michael Mullen highlighted planning for "potential military courses of action" against Iran; just as the Bush administration's catechism of charges against the Iranians in Iraq reaches something like a fever pitch; at the moment when rumors of, leaks about, and denials of Pentagon back-to-the-drawing-board planning for new ways to attack Iran are zipping around ("Targets would include everything from the plants where weapons are made to the headquarters of the organization known as the Quds Force which directs operations in Iraq"); and only days before the U.S. military in Iraq is supposed to conduct its latest media dog-and-pony show on Iranian support for Iraqi Shi'ite militias ("including date stamps on newly found weapons caches showing that recently made Iranian weapons are flowing into Iraq at a steadily increasing rate"). On the dispatching of that second aircraft carrier, Secretary of Defense Robert Gates offered the following comment: "I don't see it as an escalation. I think it could be seen, though, as a reminder."
And, when you really think about it, it is indeed a "reminder" of sorts. After all, the name of that second carrier has a certain resonance. It's the USS Abraham Lincoln, the very carrier on which, on May 1st exactly five years ago, President George W. Bush landed in that S-3B Viking sub reconnaissance Naval jet, in what TV people call "magic hour light", for his Top-Gun strut to a podium. There, against a White House-produced banner emblazoned with the phrase "Mission Accomplished," he declared that "major combat operations in Iraq have ended."
Now, more than five years after Baghdad fell, with Saddam Hussein long executed, Osama bin Laden alive and kicking, and American soldiers fighting and dying in the vast Shi'ite slum suburb of Sadr City in Baghdad, the dangerous administration game of chicken with Iran in the Persian Gulf and elsewhere once again intensifies. It's a dangerous moment. When you ratchet up the charges and send in the carriers, anything is possible.
We regularly read about all of this, of course, but almost never as seen through anything but American administration or journalistic eyes (and sometimes it's hard to tell the two apart). The author of Globalistan and also Red Zone Blues, Pepe Escobar, a continent-hopping super-journalist for the always fascinating Asia Times and now The Real News as well, has done a striking job of covering the Iraq War, the various oil wars and pipeline struggles of the Middle East and Central Asia, and, these last years, has regularly visited Iran. Today, in his first appearance at Tomdispatch, he offers something rare indeed, an assessment of Iran "under the gun" – without the American filter in place......"
Posted by Tony at 4:42 AM