About That ‘New’ Middle East… 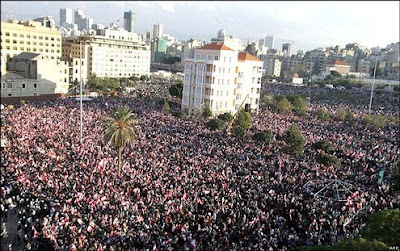 "Could there be a more perfect image of the catastrophic self-inflicted rout suffered by U.S. Middle East policy under President George W. Bush? This week, the President will party with Israel’s leaders celebrating their country’s 60th anniversary — and champion the pursuit of a phony peace agreement explicitly aimed at producing an agreement to go on the shelf — with Bush curiously choosing the moment to honor the legend of the mass infanticide and suicide of the Jewish Jihadists at Masada. Meanwhile, across the border in Lebanon, Hizballah are riding high on the tectonic shifts in the Middle East’s political substructure, making clear that the “new Middle East” memorably (if grotesquely) inaugurated by Condi Rice in Beirut in 2006 is nothing like that imagined or pursued by the Bush Administration. On the contrary, the Bush Administration has managed to weaken its friends and allies and empower its enemies to an almost unprecedented degree.
The collapse and humiliation of the U.S.-backed Lebanese government after it had foolishly threatened to curb Hizballah’s ability to fight Israel was simply the latest example of a failed U.S. policy of cajoling allies into confrontations with politically popular radical movements that the U.S. and its allies simply can’t win. And picking fights that you can’t win is not exactly adaptive behavior. Indeed, as I noted earlier this week, recovering alcoholics in America are taught the adage that repeating the same behavior and expecting different results is the very definition of insanity — but by measure of what we’ve seen in Gaza, Basra, Sadr City, that’s one lesson that appears to have eluded this particular administration. The Lebanese showdown was initiated by Washington’s closest allies threatening to close down Hizballah’s internal communication network, and it’s hard not to suspect that such a provocative move could only have been taken with Washington’s encouragement. And to put it unkindly, paper tigers should not play with matches......"
Posted by Tony at 6:11 AM