Bush visit to Israel revives talk of a strike on Iran 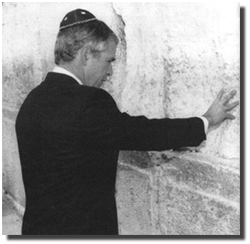 In 22 minutes, Bush offered one of the strongest demonstrations of support for Israel ever made by an American president. And he reawakened lingering hopes among hawks in Israel or the United States for a U.S. military strike to thwart Iran's nuclear program.

Israel's Army Radio reported Friday that the possibility of an American strike on Iran was raised in private discussions during Bush's visit.

And Mark Regev, spokesman for Israeli Prime Minister Ehud Olmert, said that the Israeli prime minister and American president were "on the same page" on the issue of Iran......

Some Israeli analysts viewed the omission as a realistic assessment of the diminishing chances for progress by year's end.

"I think he made a decision, or his aides made a decision, that it's better to play down this thing. Otherwise he would look ridiculous," said Uri Dromi, who served as a spokesman for Israeli Prime Ministers Yitzhak Rabin and Shimon Peres......

The skepticism of Israeli lawmakers about peace talks became clear even before Bush spoke. Two conservative religious lawmakers walked out during a speech by Olmert when he raised the subject of ceding land to the Palestinians.

One of them suggested that Bush is a stronger Zionist than Olmert. Olmert should "learn from the president of the United States what Zionism is," Israeli lawmaker Zvi Hendel said in a statement after walking out of the session as Bush looked on......"
Posted by Tony at 6:17 PM