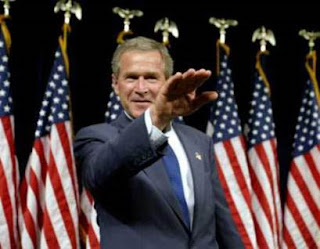 By Richard Silverstein
The Guardian

"Malvina Schwartz survived Auschwitz as a young girl. She managed to make her way to America and eventually came to Los Angeles where I published her oral history in 1977 in the Los Angeles Times. I am certain that Malvina is no longer alive. But if she had managed to survive to today, I'd like to think she would have something to say about George Bush's misuse of the Holocaust for political gain in his speech to the Israeli Knesset.........

Bush's speech lauded Israeli democracy and even went so far as to claim that our Puritan ancestors were incipient Zionists (Bush's speechwriters lifted this from Netanyahu's favorite pundit, Michael Oren, and his latest book about the roots of Zionism in American political thought).

Bush's version of Israel in this speech was air-brushed to remove the moles, scars and other imperfections. Gone was the second-class Israeli-Arab minority and gone too those Palestinians who seek to realize their own national vision in their own country. In their place Bush posited Israel as a model western democracy. What the president does not understand is that true democracies are states of all their citizens, not just a privileged majority as Israel is........

.........It is Bush who is the radical breaking from American diplomatic convention. He should be in the dock and called to account for wreaking havoc with our international relations. Instead, he attempts to tar his Democratic opponent with the brush of weakness and defeatism.

Bush proves in this speech that he understands nothing about the Middle East. He certainly doesn't understand Islam. He sees it all through the narrow prism of terrorism. It is the struggle of good versus evil; God and the devil. There is no subtlety, no nuance. His views are utterly hopeless.

It is outrageous for an American president to use the term "appeasement" in describing the policy of an opponent when speaking before the parliament of a foreign nation. Democrats have rightly reacted with deep anger to this affront. It seems that when it comes to American traditions, George Bush is content to play Samson and topple the pillars of the temple in order to smash precedents he dislikes. What he forgets is that Samson not only killed his enemy, the Philistines, but himself as well.

Bush's interminable and self-destructive presidency will continue to be so till the bitter end. And if he can topple the campaign of his political enemy, he's prepared to bring the walls down on himself as well. So ends one of the most shameful of American presidencies."
Posted by Tony at 7:18 AM