There is no alternative to the right of return 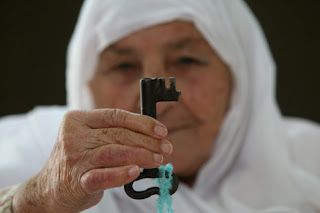 Statement, National Committee to Commemorate the Nakba at 60, 15 May 2008

".....Today we reaffirm our rights, not least those articulated in UN General Assembly Resolution 194; we reaffirm our reclamation of our national unity and an end to internal division through open discussion, and we reaffirm our commitment to the project of reviving the Palestine Liberation Organization, the sole legitimate representative of the Palestinian people and the uniting framework of the our people and our struggle. As such, it is imperative that we prioritize the following steps in relaunching our march along the road of return:

To reflect the reality that the Nakba did not end in 1948, but has continued every day since then as Israel works to expand its control of our land and expel our people from it. As such we call for the adoption of the phrase "Ongoing Nakba";
That we refer to the Palestinians who managed to stay within the part of Palestine occupied in 1948 as the "Palestinians within the Green Line" or the "Palestinians in 1948 occupied Palestine" when referring to them, instead of phrases that deny them their Palestinian identity. Also to refer to "Historic Palestine" when referring to the Palestine's borders during the British mandate, as well as stressing that the right of return is to the refugees' "original homes and properties";
Consolidating and bolstering the culture of return through our society's formal, popular and civil institutions, and ensuring that this is disseminated consistently and as widely as possible through all means;
Considering a person or organization's stance on the right of return as the litmus test that determines our relationship with Israeli institutions and entities, and a measure for differentiating between projects as ones aimed at normalization or not;
Strengthening the popular campaigns in Palestine, the Arab world and internationally, particularly the campaign for boycott, divestment and sanctions (BDS) against Israel, as well as the campaign for academic and cultural boycott, and the campaign against the Israeli apartheid wall;
Organizing an international campaign to push the United Nations to readopt its resolution recognizing Zionism as a form of racism;
To stress in our work, language, and daily life the important distinction between Zionism and Judaism, and that Israel is a product of international Zionism that is nothing other than a colonial apartheid state;
To be very clear that any political arrangement, including the "two-state solution," that does not include the full implementation of the rights of the refugees, is in no way a solution, and no more than an insulting and deceptive way of conflict-management;
To ensure that the Palestinian narrative is properly documented, and included in all Palestinian educational curricula;
Closely working with international movements that are in solidarity with our struggle to strengthen its place on the international agenda; and mobilizing Palestinian solidarity with the causes and struggles of oppressed people around the world, particularly the struggles of indigenous peoples for sovereignty and liberty.

You who shall undoubtedly return,

After 60 years of expulsion, exile and refuge; after 60 years of international impotence, and the failure of international organizations to enforce their own decisions; and after 60 years of Israeli arrogance, we declare that the commemoration of the Nakba as of today will nothing but a date to renew our commitment to struggle until we achieve our return to our original homes and lands. We declare the return to be the program of our struggle, and not just a demand, and will continue as such until the end of the Nakba, "whether they like it or not" as Yasser Arafat once said.