The View from the Crusaders' Castle 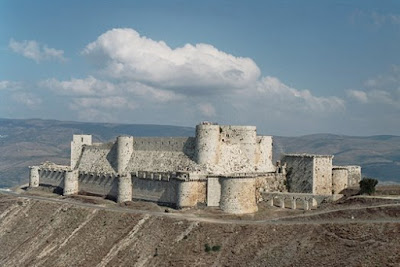 "Thirty years ago, when the state of Israel had traveled only half its present journey through time since 1948, I interviewed General Matti Peled in New York. As an army general Peled had been a notably tough administrator of the Occupied Territories, but in retirement had become a dove, publicly urging his country to negotiate seriously with the Palestinians, abandon the illegal settlements, return to the ’67 borders and resolve all the other major issues obstructing a proper peace.

“What do you think will happen,” I asked the former general, “If no Israeli government ever emerges strong enough to take such a path?”

“Oh, I think we’ll end up like the Crusaders,” he answered. “It might take some time, but just like them, in the end, we’ll be gone.” It was startling at the time to hear any Israeli, particularly a military man, talk like that.......

Bush may rant in the Knesset , but US policy in the region has sustained a humiliating rebuff as the government of Lebanon rescinds its efforts to cut back on Hezbollah’s communications systems and ability to monitor all traffic at Beirut airport. With Israel in a uproar about missile salvoes on Ashkelon from Gaza, no one will forget Hezbollah’s ability to launch similar salvoes.....

Earlier this week I looked south toward Israel from the Krak des Chevaliers, the greatest of the Crusaders’ castles, looming above the Syrian coastal plain about four hours drive from Damascus. The odious T.E.Lawrence called it “perhaps the best preserved and most wholly admirable castle in the world.” Despite the efforts of Saladin, the Hospitallers were never dislodged from the Krak by force. It was eventually the Mamluk Sultan of Egypt, Baybars, who winkled them out by negotiation, in 1271 after the Crusaders had held it for 162 years.

Standing on the great south tower (actually completed by French engineers in the 1930s) I remembered Peled’s remarks about Israel and the Crusaders, who held the Krak three times longer than Israel’s present span. The hawks, just as Peled and scores of other doves in recent years charge, have not buttressed Israel’s security. In the middle and long term they have gravely compromised it. The balance of forces in the region have changed drastically from the US dominance of a generation or two ago. Soon Bush will be gone; Olmert maybe sooner. Just all all new visitors to Iarael are given a tour of Yad Vashem, perhaps all politicians pondering Israel’s security and justice for Palestinians should also be given a compulsory tour of the Krak des Chevaliers. "
Posted by Tony at 10:11 AM