Why Bush must recognise the Nakba 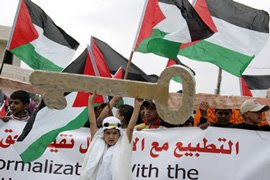 By Sandy Tolan, professor and author

"......What the president will not hear is the Palestinian story.

He will not be told that one side's "War of Independence" is the other side's "Nakba", or "Catastrophe".

And no one is likely to mention that Israel's heroic survival was, to the Arabs, a dispossession in which 750,000 Palestinians fled or were driven out of their homes.

Here then, is a brief Nakba primer for the US president, a chronicle of the untold to accompany him on his visit to Jerusalem.

In the spring of 1948, waves of fear gripped Arab Palestine following the April 9 massacre of more than 120 unarmed Palestinians by extremist Jewish militias in the village of Deir Yassin, near Jerusalem. Thus, even before the war officially began, Arab villagers were fleeing for safer ground, fully intending to return when the fighting stopped.

Later that month in Galilee, Yigal Allon, commander of the elite Jewish brigade known as the Palmach, implemented a plan to spread more fear among the local Arabs. Allon would later write that he gathered Jewish leaders "who had ties with the different Arab villages, and I asked them to whisper in the ears of several Arabs that giant Jewish reinforcements had reached the Galilee and were about to clean out the villages ... [and] to advise them, as friends, to flee while they could ... the flight encompassed tens of thousands. The stratagem fully achieved its objective."

The next month, May 1948, a similar campaign took hold in the village of Na'ani, according to local Arab and Israeli sources, when a Jewish neighbour rode into town on horseback shouting: "The Jewish army is coming! You must leave or you will all be killed!" The villagers fled en masse, many going a few miles north to the Arab town of Ramle. There, they hoped, it would be safe. Two months later, on July 12, Israeli forces overwhelmed local Arab defenders and occupied the refugee-choked Ramle (now the Israeli city of Ramla) and neighbouring Lydda (now Lod). The same day they began expelling the Arabs of the two towns.

According to the memoirs of Yitzhak Rabin, then a young Israeli major, the orders came directly from Isreal's first prime minister, David Ben-Gurion. Three days later, Ben-Gurion wrote in his diary, "there are 30,000 refugees moving along the road between Ramle and Lydda ... they are demanding bread ... "

The people of Ramle and Lydda had left in haste and packed little, unprepared for a long hike across stony ground of cactus and Christ's thorn in mid-summer temperatures that reached 100 degrees Fahrenheit (38 degrees Celsius). Decades later, old men and women in refugee camps would recall, above all else, their thirst and how they attempted to quench it with stagnant water found in old wells and, in some cases, with their own urine.

John Bagot Glubb, the British commander of the Arab Legion, would write that "nobody will ever know how many children died".

Sixty years later, the Nakba lies at the core of the Palestinians' identity and of their view of history and justice. Official US ignorance of that, passed down through generations and embodied in Bush's visit only to the Israeli side, has, unsurprisingly, angered Palestinians. "It is a slap in the face," Diana Buttu, a prominent Palestinian analyst in the West Bank, told The New York Times, adding that the US is essentially saying: "You have no history and your past does not matter." 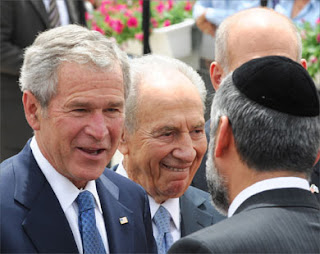 But more than the insult or even stupidity of such a one-sided position is the tactical bungling of an administration that wants to be seen as a fair arbiter of a long-standing dispute. That is pretty hard to do, if all you can see is one side's pain and glory."
Posted by Tony at 4:40 AM