Abu Zaid: Gaza is experiencing its own unique Nakba 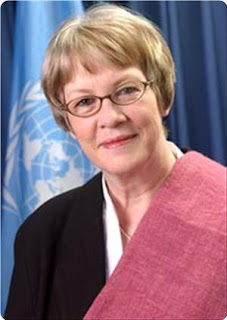 "GAZA, (PIC)-- Karen Abu Zaid, the commissioner-general of UNRWA, stated on Saturday that Gaza is experiencing its own unique Nakba, a catastrophe which was wrought on it by the cruelties of continuing occupation and the tightening siege.

These statements came during a photo exhibition held in Gaza by UNRWA, "I am from there and I remember," which commemorates and celebrates the Palestinian life before the Nakba.

"As you view each photograph, I urge you to spare a thought for the lives and the humanity that lie behind them, the sheer human resourcefulness, and the sense of lost potential. These are real people, people whose history cannot be airbrushed away. Indeed they are a people with a past, a history that will cannot be denied," Abu Zaid said at the opening of the exhibition.

In another context, the popular committee against the siege announced Saturday the death of an eight-month-old female infant called Salwa Abu Tawaheen who was suffering from blood cancer.

The Abu Tawaheen family said that they submitted 20 days ago a request to the IOA to allow their daughter to receive medical treatment outside Gaza, but the infant died in hospital while her family was waiting for the permission.

Palestinian medical sources also announced the death of another Palestinian patient called Husni Salah, 45, who suffered cardiac failure due to the lack of medicines and the Israeli restrictions imposed on travel.

These new deaths bring the number of Israeli siege victims to 156 patients, while the specter of death is threatening a long list of patients in Gaza who have serious and chronic diseases."
Posted by Tony at 1:09 PM