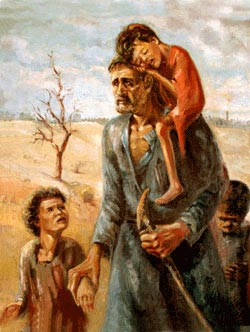 In the Galilee, Jonathan Cook hears how erasing all traces of Palestine and its people was the lynchpin of the Zionist agenda

"Amin Mohamed Ali (Abu Arab), 73, is a refugee from the village of Saffuriya, three miles northwest of Nazareth. The village, home to 5,000 Palestinians, was one of the largest in the Galilee and among the first to be bombed from the air, according to Israeli historian Ilan Pappe. It was occupied on 16 July 1948. Most of its refugees ended up in Lebanon, but some fled to nearby Nazareth, where they established a neighbourhood, Safafra, named after their village. Abu Arab's home overlooks his family's former lands, now farmed by a Jewish community called Zippori. His old home was destroyed, now covered by a pine forest planted by the Jewish National Fund. He is one of the founders of the Saffuriya Cultural Association and organised this year's Nakba procession to Saffuriya......."
Posted by Tony at 6:07 AM