When Bush Speaks of Democracy… It's Hypocrisy 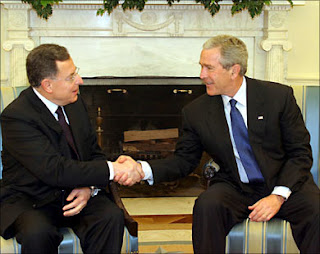 One and a half years earlier, more than one and a half million people took to the streets to demand Fouad Saniora's resignation. More than 18 months of protests and sit-ins didn't reach the ears or the consciousness of this unconstitutional prime minister.
If this is not violation to the principle of democracy then what is?

Of course, democracy the Bush way.
"By the way it's in Israel's interest that the Lebanese democracy survives," Bush told Israel's Channel 10 on Monday. The American President was speaking ahead of a meeting with the head of another Washington-style democracy leader, Ehud Olmert, to mark the 60th anniversary of usurping Palestine and massacring half of its people.

Bush said he planned to consult with regional leaders during his trip to the Middle East this week in order to coordinate efforts to support Saniora's government and implement U.N. resolutions supporting Lebanon's sovereignty.

"It is critical that the international community come together to assist the Lebanese people in their hour of need," said Bush, who leaves Tuesday on a five-day trip to occupied Palestine, Saudi Arabia and Egypt.

"The Lebanese people have sacrificed much for the sake of their freedom, and the United States will continue to stand with them against this latest assault on their independence and security," he said in the statement.

"If Bush is limiting the Lebanese people to one group, that is the ruling bloc, and disregarding the other group which constitutes more than two-thirds of the population, then this is hypocrisy. It's true that the Lebanese people have sacrificed for their freedom, but their freedom was fulfilled when Israel was forced out of Lebanon in 2000 under the strikes of the resistance and the steadfastness of the resistance community, after 22 years of US backed occupation and oppression," political analyst Mohamad Yusuf told Al-Manar site.