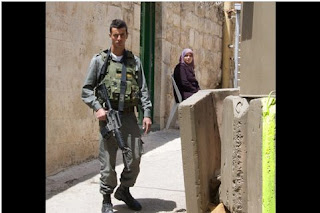 "With 400 hard-line religious settlers packed tightly amidst more than 160,000 Palestinians in the center of Hebron's Old City, violence is not a probability, it is a given. Add to that the nearly 2,000 Israeli troops assigned to "protect" the settlers -- a loose term given the near total impunity enjoyed by the settlers whose daily abuse of their Palestinian neighbors is unimaginable -- and you can begin to understand how peace is a little more than a word in this part of the West Bank.

After touring some of the devastation wrought by Israel's "separation barrier" the previous day and witnessing the dissected refugee town of Deir al-Barid where children are forced to scramble through a fetid and dangerous sewage system as their only means of access between their homes and school, I felt certain little remained to shock me. I was wrong.