Unseen and unreported, Israeli police attacked children and parents who wished to remember the Palestinian national tragedy that is the flipside of the birth of Israel 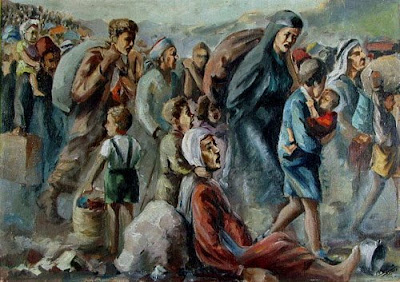 The Exodus by Ismail Shammout

"......But this year's Independence Day festivities hid as much as they revealed. The images of joy and celebration seen by the world failed to acknowledge the reality of a deeply divided Israel, shared by two peoples with conflicting memories and claims to the land.

Away from the cameras, a fifth of the Israeli population -- more than one million Palestinian citizens -- remembered the Nakba, the catastrophe of 1948 that befell the Palestinian people as the Jewish state was built on the ruins of their society.

As it has been doing for the past decade, Israel's Palestinian minority staged an alternative act of commemoration: a procession of families, many of them refugees from the 1948 war, to one of more than 400 Palestinian villages erased by Israel in a monumental act of state vandalism after the fighting. The villages were destroyed to prevent the refugees from ever returning.

But in a sign of how far Israel still is from coming to terms with the circumstances of its birth, Israeli police forcibly broke up this year's march. They clubbed unarmed demonstrators with batons and fired tear gas and stun grenades into crowds of families that included young children.....

Most of the refugees are living in refugee camps in neighbouring Arab states but a few remained inside Israel. Today one in four Palestinian citizens of Israel is either a refugee or descended from one. Not only have they been denied the right ever to return to their homes, like the other refugees, but also many live tantalisingly close to their former communities.

All of the destroyed villages have either been reinvented as exclusive Jewish communities or buried under the foliage of national forestation programmes overseen by the Jewish National Fund and paid for with charitable donations from European and American Jews........"
Posted by Tony at 4:49 AM