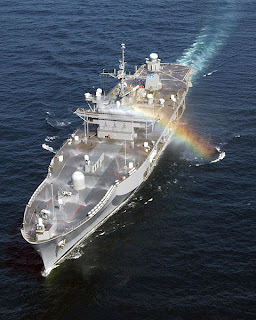 "DEBKAfile’s military sources report that Saturday, May 17, the USS Mount Whitney , considered the US Navy’s most advanced command, control, communications, computer and intelligence vessel, took up position opposite Lebanese shores for an “unscheduled mission.”

The Sixth Fleet spokesman Lt. Patrick Foughty said the ship would be there “to support additional communication requirements for our ships already underway.”

DEBKAfile’s sources add that the USS Cole missile destroyer arrived in that sector last week, while the USS Harry Truman carrier strike group began cruising in the Mediterranean around Greece, whence the aircraft on its decks can reach Syrian and Lebanese skies. The fleet spokesman added there are no long-term plans to keep the Mount Whitney away from its home base.

Although the US lieutenant did not name those plans, military observers gained the impression that the American navy-air build-up off Lebanon was designed for a short stay or a specific operation, after which it will disperse.

Our sources disclose that, during the fierce Hizballah onslaught on Beirut last week and its closure of the international airport, the Americans ran a helicopter lift from Cyprus to the US embassy landing pad with provisions of food, water, medicine and personnel.

The Mount Whitney enables a joint task commander to effectively control all the units of his force. The ship can receive and transmit large amounts of secure data from any point on earth and provide timely intelligence and operational support as needed."
Posted by Tony at 8:45 AM