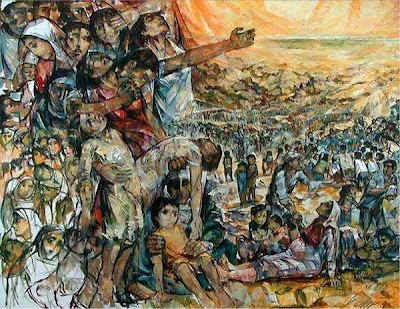 The Road to Nowhere by Ismail Shammout 1930-2006. He was expelled from Lydda in 1948. The plight of the refugees is depicted in many of his most famous paintings.

"......In my view, the Nakba is none of these things, and the attempt to make this year the 60th anniversary of the Nakba's life and death is a grave error. The Nakba is in fact much older than 60 years and it is still with us, pulsating with life and coursing through history by piling up more calamities upon the Palestinian people. I hold that the Nakba is a historical epoch that is 127 years old and is ongoing. The year 1881 is the date when Jewish colonisation of Palestine started and, as everyone knows, it has never ended. Much as the world would like to present Palestinians as living in a post-Nakba period, I insist that we live thoroughly in Nakba times. What we are doing this year is not an act of commemorating but an act of witnessing the ongoing Nakba that continues to destroy Palestine and the Palestinians. I submit, therefore, that this year is not the 60th anniversary of the Nakba at all, but rather one more year of enduring its brutality; that the history of the Nakba has never been a history of the past but decidedly a history of the present.......

But in resisting the Nakba, the Palestinians have struck at the heart of the Zionist project that insists that the Nakba be seen as a past event. In resisting Israel, Palestinians have forced the world to witness the Nakba as present action; one that, contrary to Zionist wisdom, is indeed reversible. This is precisely what galls Israel and the Zionist movement. Israel's inability to complete its mission of thoroughly colonising Palestine, of expelling all Palestinians, of "gathering" all Jews in the world in its colony, keeps it uneasy and keeps its project always in the present continuous.

While Israel has used this situation to project itself as a victim of its own victims who refuse to grant it legitimacy to victimise them, Israel understands not only in its unconscious but also consciously that its project will remain reversible. The cruelty it has shown and continues to show to the Palestinian people is directly proportional to its belief in their ability to overthrow its achievements and reverse its colonial project. The problem for Israel is not in believing and knowing that there is not one single place in its colonial settlement that did not have a former Arab population, but in its realisation that there is no place today in its imaginary "Jewish State" that does not still have an Arab population who claims it.