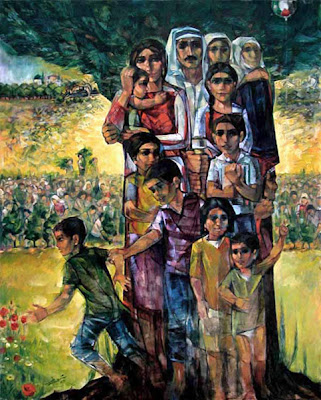 "......Each side has its own way of commemorating the founding of the so-called state of Israel. Perhaps the best book that can be read on this occasion is The Ethnic Cleansing of Palestine by Ilan Pappe. In this latest of his works, the Israeli historian systematically and in uncompromisingly objective detail exposes the fallacy of the Zionist narrative of events between 1947 and 1948. Pappe argues that the expulsion of hundreds of thousands of Palestinians was not the product of the random circumstances of war, but rather the deliberate combat goal of early Israeli military units. He substantiates his arguments with extensive documentation of more than 30 horrific massacres of Palestinian civilians and demolitions of Palestinian villages carried out by members of the Haganah, the Irgun and the Stern Gang. His invaluable work crowns a collection of similar studies undertaken by such eminent scholars as Avi Shlaim, Walid Al-Khalidi and Edward Said.......

Sixty years after its founding, the Israeli establishment -- ruled today by generals of war and captains of the military-industrial complex -- can not, no matter how hard it tries, discredit the legitimacy of the Palestinian struggle for the universally recognised basic human rights to equality, freedom and self-determination. Nor will it ever succeed in refuting Mandela's famous observation that the Palestinian cause is the foremost challenge to international humanitarian conscience.

Supporters of the Israeli occupation are ceaselessly amazed at how tenaciously the Palestinians refuse to cave in to the cruellest of blows. Nor can they conceal their wonder at the constantly regenerating impetus the drive for Palestinian rights has received from new generations of Palestinians, even from those born and raised in the Diaspora, whose sense of what is wrong and unjust only deepens with time.

Despite our failures, our divisions and our mistakes, and despite the cruelties the world, both near and far, has meted out to us, we -- the Palestinians -- are moving forward, struggling to keep the torches of self-confidence, hope and faith in the value of human justice alive and burning.

Meanwhile Israel -- the fourth largest arms exporter in the world, possessor of 400 nuclear warheads, the manufacturer of ceaseless wars, the driver of an economy thriving on stolen land and water, and on the sweat of others' brows -- is sinking further and further on the scales of humanitarian values, as though determined to move against the tide of justice which colonialist powers larger and older than Israel failed to turn -- in India, Algeria, South Africa, and certainly in Palestine."
Posted by Tony at 5:38 AM