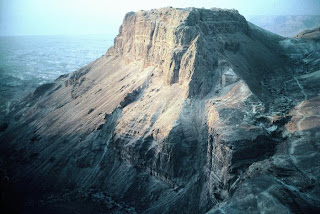 By Tony Karon
"Sobriety remains elusive in Bush’s Middle East policy as he tells the Knesset, “Masada will never fall again!” — as in, “Remember the Alamo!” Having visited the iconic site at which Jewish Jihadists of yore are said to have committed mass suicide rather than surrender to the Romans, Bush was plainly moved to substitute war cries for serious policy. Long on the vacuous militancy that has characterized his entire tenure, Bush reprised the infantile posturing that compared talking to Hamas with appeasing the Nazis (uh, is that what Olmert is doing by negotiating a cease-fire with it via Egypt?), branding Iran the fount of global terrorism and warning that “Permitting the world’s leading sponsor of terror to possess the world’s deadliest weapon would be an unforgivable betrayal of future generations,” Bush told the Israeli parliament to mark its 60th birthday. “For the sake of peace, the world must not allow Iran to have a nuclear weapon.”

Don’t talk to Hamas or Iran, don’t allow Iran to have nuclear weapons, etc. etc. But what exactly is he offering? Is he going to bomb Iran? And then what? There’s no policy here, just testoterone......"
Posted by Tony at 7:00 AM