Refugees are the Key 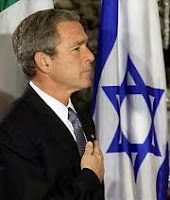 "President Bush addressed the Israeli Knesset to mark Israel’s sixtieth anniversary. The President’s speech was absent of any real insight or policy. Instead of addressing the politics of a region that can only be equated to a powder keg about to explode, he assumed the other worldly role of bestowing on Israel a religious right, one dangerously terrifying because it represents the views of the most rabidly extremist Jews, similar to the Jewish law student that assassinated Israeli Prime Minister Yitzhak Rabin and the gun-toting Israeli settlers (many holding dual U.S./Israeli citizenship) that populate Israel’s Jewish-only settlements across the West Bank and in East Jerusalem.

President Bush used the out-dated words “Eretz Yisrael” [biblical Land of Israel] to depict the Israeli state. This sort of usage was, and is, exactly what most right-wing Jewish fundamentalists use to refer to an Israel that reaches from the Euphrates River, in what’s left of today’s Iraq, to the Mediterranean Sea.

Adding insult to injury, he went on to praise Israel’s welcoming of immigrants from around the world to populate the newly created State of Israel. It meant absolutely nothing to President Bush that the indigenous Palestinian population, lingering for 60 years only hours away from where he was standing while addressing the Knesset and on whose ruins Israel was built, remains today’s longest standing refugee community......

It does not come as a surprise to Palestinians, and an ever-growing number of non-Palestinians, that President Bush’s speech reflected blindness to the plight of Palestinian refugees. Those Palestinians from the Diaspora, not refugees, but Palestinians with their homes in the West Bank and Gaza Strip, along with non-Palestinian foreign nationals trying to assist Palestinians by working and serving in the occupied territory, have become the latest category of victims of the most recent application of the Israeli “might is right” mindset. Israel has been denying entry to scores of foreign nationals, Palestinians and others, trying to enter the occupied territory. The mass majority of these foreign nationals are U.S. citizens and the Bush Administration, although acknowledging that Israel is discriminating against U.S. citizens based on their ethnicity, have done very little in standing up to its “eternal” ally Israel in order to resolve this latest problem......."
Posted by Tony at 10:54 AM