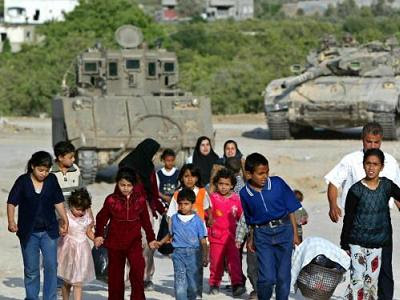 Did the Palestinians really flee or did we, the Israeli Jews, drive them out?

"......For Israeli Jews, 60 Years is a cause for celebration rather than reflection. Still, the poltergeist churns, the celebrations are exaggerated, even forced, an unsettled disquiet permeating the festivities, most visibly in the presence of thousands of soldiers and distinctly militaristic character. The Palestinian people, exhausted, brutalized, impoverished, steadfastly refuse to disappear or submit. In 1967 Israel defeated the entire Arab world in six days; after more than 40 years it is unable to pacify the unarmed Palestinians. As the history of colonialism shows, a people cannot be defeated, oppression cannot be normalized or sustained, no matter how strong the dominating regime seems to be. Nineteen sixty-seven had to do with occupation. Had we dealt with that wisely and justly, Israel today could have been a Jewish state on 78% of the Land of Israel living at peace with its neighbors. Nineteen forty-eight, the focus of the 60 Years, is a different matter entirely. With the Occupation having been transformed into a permanent political fact (a Palestinian prison-state a la a South African Bantustan will not resolve the conflict), the question of peace, co-existence, and reconciliation now shifts to the entire country, to an indivisible Israel/Palestine. No need to blame the Palestinian for that; they accepted the two-state solution way back in 1988. It is us, those who thought (and still think) that military power combined with Jewish victimhood can defy a people's will to freedom, who carry the responsibility........"
Posted by Tony at 6:21 AM